On the 30th of March we went outside and we watched some children do the Bikability course. We got into groups and listened to the man leading the course. We put counters down every time he talked onto sheets saying the sentence types. These are: command, statement, question and exclamation. After that, we made sentences that were one of each sentence type.

Maths in the Willow Garden

As it was no pencil day, Dolphins couldn't do maths in our books, so, we went outside and had to do multiplication, addition, subtraction and division calculations using the natural things around us. These are some of them :

On Thursday 9th March, Dolphins learnt about the different types of rocks. These are: Igneous, Sedimentary and  Metamorphic. Today, 10th March, the children conducted an experiment to test their density, permeability and durability.

On World Book Day, Dolphins made their own nonsense poem.To do this, they stood in two lines, facing each other.One side thought of a noun ( the name of a thing ) and the other side thought of a verb ( a doing word ) with 'ing' on the end.They then combined these to make funny poem lines. This is  the finished poem...

On Friday 3rd March 2017, musician, teacher, author and poet Paul Delaney came in to the hall to teach year 4 about poems. There was a particular poem we looked at. This was a special poem because it was only two months old! We made our own versions of it.

A Day at the Mosque

On Wednesday 8th February this year, all of year 4 went to E Madina Mosque, as their topic was' The Golden Age

of Islam '.They had a great time learning about the mosque,what was in it and the religion of Islam.At the end, the people there kindly gave them crisps and juice.

I built myself a snowman,

As perfect as can be,

I thought I'd keep it as a pet,

And let it sleep with me.

I made it some pyjamas,

And a pillow for it's head.

Last night it ran away though,

But first it  wet my bed.

There was an old,old town,

And the mayor was me!

When the children read or performed a poem, they get a raffle ticket (gold tickets for performing a poem and green ones for reading). At the end of the four weeks, prizes will be given out to the lucky winners!  .

A lot of parents have been asking about our Bronze,Silver and Gold tests for multiplication tables.Well,there are three parts of the test; first is Bronze. If someone is doing their eights, for Bronze they would say the table up to 12 times like 1 x 8=8 2 x 8 =16 and so on.Silver is when the teacher has to say a random times question (like 9 x 8) and then the pupil has to say the answer (72).Finally,Gold is where if someone was being tested on their eights the teacher would say,"What do I have to times by 8 to get 96?" This gives the children a way to remember the division facts.Now you know this,you can test your children at home so they're ready.

The Golden Age of Islam

This term Year 4 are learning about The Golden Age of Islam and The Silk Road.  We have watched videos and

acted out about the Silk Road to help us with our topic. We have also looked at Islamic art and written our name in  calligraphy.

The Silk Road was a trade route - not a road and not made from silk though - spreading from China in the East to Italy in the West.People traded goods and precious things along it but the main thing was silk.Wearing silk was one way to show your wealth and how to make it was one of the best kept secrets in China.

Dolphin's teacher, Mrs Emeny, has decided to give two students the job of being bloggers for the Dolphins page.

The chosen two were Alex D and Elizabeth N because of their skills in English, hard work and perseverance.

These children will keep you up to date with the Dolphin's class news.

The Eye Factor Grand Final was on Monday the 19th of December last year at St Matthew's church,Eye,Peterborough,the children from year 4 at this school competed in The Eye Factor 2016!

welcomed 160 parents to the performance! The presenters were also the band's mentors.

and "Living On a Prayer".There were two girl bands called The Shooting Stars and 7 Perfect Angels.They sang

"Roar" and "Wings".Then there were four mixed bands called Beat X,Seven Elevens,One Way and Star Believers who sang "Bring It All Back","Pure and Simple","A Whole New World" and "I'm A Believer".

All of year 4 sang the songs "Can You Feel It" and "All I Want For Christmas Is You".

Everybody thought it was a very fun and entertaining evening.

During Spring Term 1, Year 4 will be investigating the ‘Golden Age of Islam’. Whilst we refer to this period as ‘The Dark Ages’, the Islamic world was gathering together knowledge and wisdom from the Greeks and Romans then building on their learning. The battery, the camera and the first clocks all come from this time along with much of the common language we use today as well as our number system. The music of ‘Scheherazade’ by Rimsky-Korsakov will be studied in order to show how instruments can become ‘voices’ and tell stories. In Art, we will discover the meaning and symbolism of Islamic Art and enrich our learning about Islam with a visit to the Faizain E-Madina Mosque in Peterborough. The visit will be in the school day and the cost will be approximately £3.50.

In English, our focus text will be ‘The Arabian Nights’, filled with fantasy, mystery and wonder. The children will base their narrative writing around Ali Baba along with Explanation Texts based on our Geography focus on the development of the Silk Road Trade Routes; the foundations for the spread of the Islamic Empire.

In Maths we will be securing our understanding of multiplication and division by using practical real life items and situations. Parents and Carers, be at the ready to chant those times tables.

The Year 4 teaching staff are so proud of the enthusiasm, motivation and focus the children have shown so far this academic year, particularly with their efforts in the ‘Eye Factor’. We are looking forward to seeing them blossom and grow. 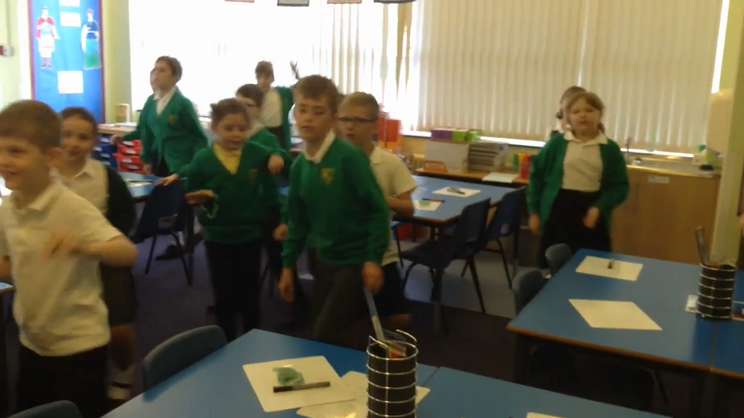 The Dolphins class are working hard on their Multiplication Tables to achieve their Bronze, Silver and Gold Awards. To get a Bronze, the children have to chant or sing their tables; for Silver they have to have to answer random, quick fire questions and for Gold they have to say what the division fact is.

Unfortunately not the ones with chocolate chips.

Some cookies are necessary in order to make this website function correctly. These are set by default and whilst you can block or delete them by changing your browser settings, some functionality such as being able to log in to the website will not work if you do this. The necessary cookies set on this website are as follows:

Cookies that are not necessary to make the website work, but which enable additional functionality, can also be set. By default these cookies are disabled, but you can choose to enable them below: